Graham started piano lessons in February. He seems to enjoy the lessons and has some natural talent, but he is not a big fan of practicing. He is quite the perfectionist so he gets really upset when he messes up. I’m just now posting this (in April) and he has learned and memorized a few songs, but playing new songs in getting harder! This little lady is my sleeper.  She fought me on naps for a few weeks this winter, but she’s back to her regular nap schedule. I think she would take 3-4 hour naps if I let her, but then she’d be up all night. We are a family of night owls… Unlike her brother she is content to lay around in bed after waking up and is in no rush to get up. Great on weekends, not so great on school days. She is quite a pill when you have to wake her up. I usually have to wake her to go to the bus stop in the afternoons or because it’s after 4pm. On this day I decided to grab some sleeping shots of her since I haven’t taken photos in awhile. Graham would have been awake after the first snap, stood up and demanded to get out of bed. February was a big month! Casey and I went on a 4 day cruise to celebrate his birthday. My parents were kind enough to watch the kids so we could get a little break. While the iterinary and ship weren’t as awesome as our previous cruises it was still nice to get away. I would say it was nice to get warm, but it was actually just as warm (or warmer) as it was in North Carolina! February was a hot month and then we had snow in March! We took a Carnival cruise out of Charleston to the Bahamas. And to finish up February a photo of Graham almost riding his bike! He’s had that bike since he was four! In March was started having him practice on the balance bike again. It’s actually the bike Caroline got for her birthday, but we bought it so he could also use it. He quickly became more confident with his balancing. 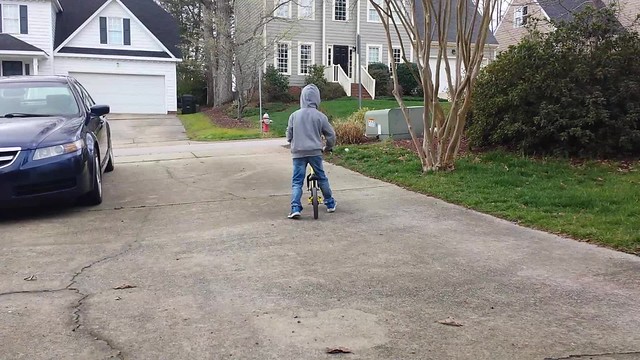 And of course sister wanted to learn how to ride a bike too. 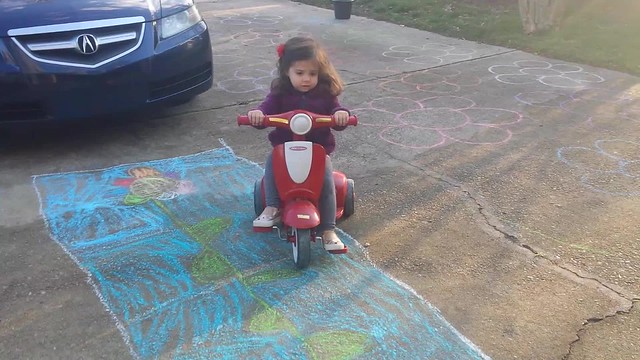 He was getting pretty good at gliding with the balance bike so I suggested he try the big bike again. His friend, one of our neighbors, was a big help and gave him lots of tips.  And then he could ride a bike! He loves riding it now and wants us all to get bikes so we can ride more together. 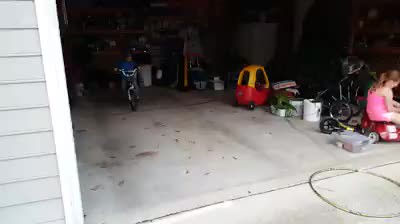 There was a time when Caroline was neat and screamed if she had paint or dirt on her hands. Now she is practicing to become a tattoo artist. I can’t leave her alone with markers or paint because the only place she wants to put them is on her skin! In March we said good-bye to our baby swing. It was well loved and on its second motor so I didn’t feel comfortable selling it for much.  I saw someone post in our neighborhood about needing baby items so I offered it to her. Hopefully it will last her awhile. It was hard for me to see the swing go. Both my babies loved that swing. Caroline enjoyed swinging her babies in it before it left. Can you believe she fit in that thing 2 years ago? We’ve also been working on blowing bubbles and just now (in April) figured it out. I think we are finally past eating the bubbles. In other February/March news, Graham now has two adult teeth on the bottom and 3 of his adult molars. Caroline finally has all her little front teeth, but sill no 2 year molars. Apparently slow teething runs on both sides of the family and hopefully will benefit us when the new, bigger teeth all come in! Caroline’s talking more and more everything. These are a few of my favorites:

no please (instead of no thank you)

where x go (she asks this a lot, about everyone and multiple times)

She also loves to say everyone’s name and to sing and dance. 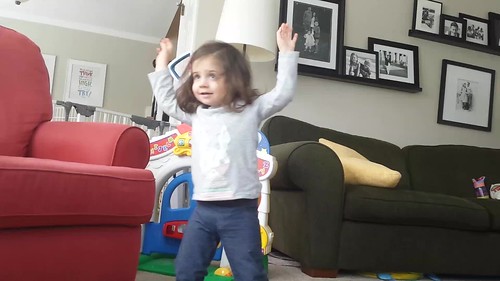